"Hi Leanne
I just want to say a huge thank you to yourself and Brent. Not forgetting the whole Stingrays team. As you know (Parent) had to rush back to the (home) on the first day of VIR. Without you guys (Swimmers) wouldn’t have made through this weekend and certainly wouldn’t have achieved what she did. Both (Swimmer 1) and (Swimmer 2) love being part of the Stingray family and that is certainly what it is, a family.
Both (Parent) and I are very proud that they are both part of that.
Thank you again for looking after (Swimmer)."

"Hello, amazing Stingrays Coaching Team!
On behalf of the (omit) family, I wanted to extend a very hearty thank you for all you have done for my two (Swimmers), culminating in their recognition last night at the Awards Ceremony. They were both quite chuffed, and (Swimmer 1) was very sorry to have missed it.
As an (omit) professional who works with (like profession), I wanted to give you all some kudos. It's one thing to be around children and teach them technical skills, etc., but it's another thing to take the time to get to know each individual under your care. You all demonstrated your passion for our sport, and for our children last night -- your introductions to each awards recipient really showed how much you take the time to get to know and celebrate each swimmer. You don't just watch these swimmers...you take the time to truly "see" them for who they are, and it shows!
We are so fortunate to have you in our circle of trusted adults who are impacting our (Swimmers') life experience." 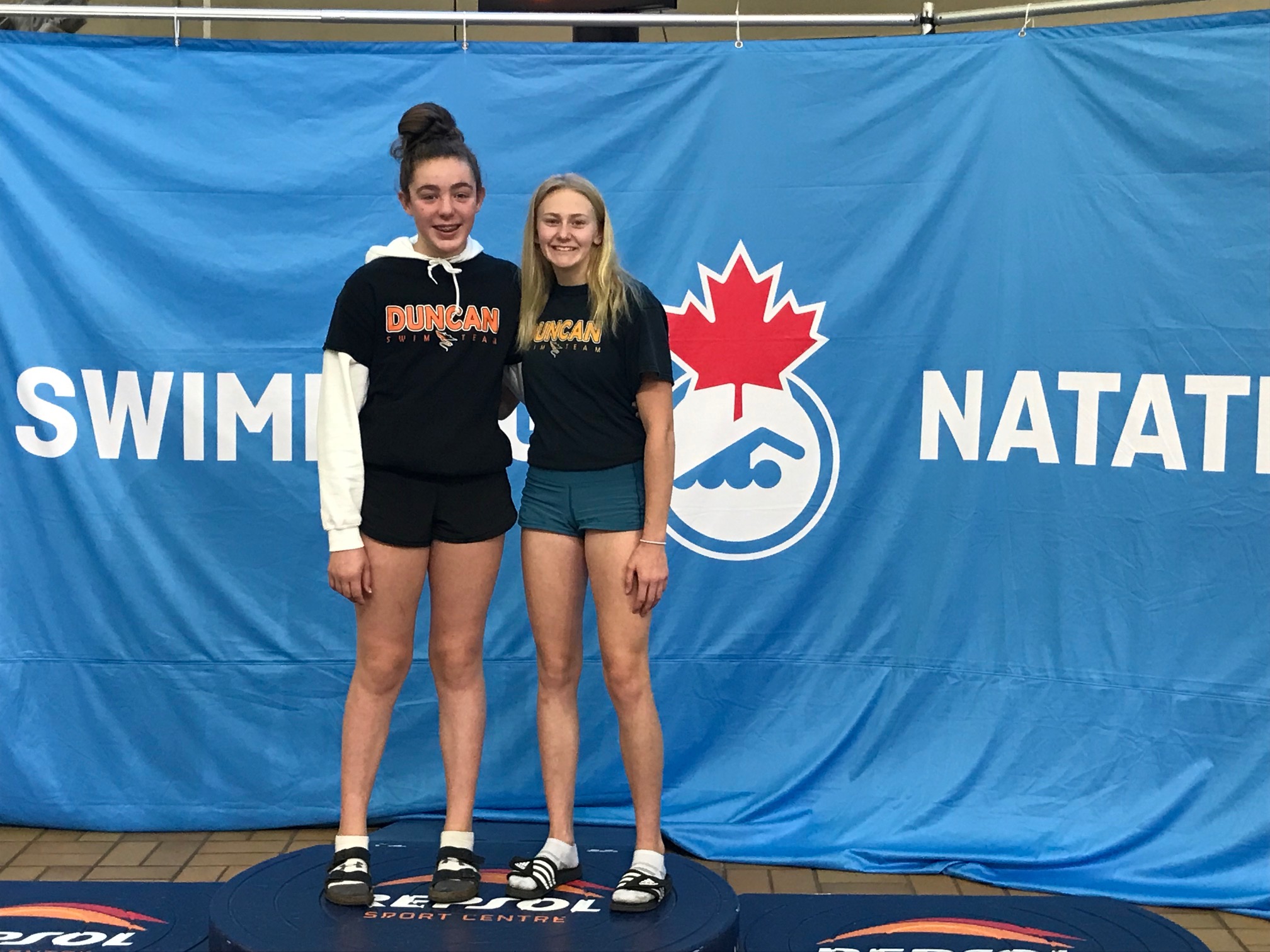 In the history of the Duncan Swim Team, fewer than 30 swimmers have competed at the national junior level, and fewer than 10 of those have reached a final.

“To say we’re proud of our swimmers would be an understatement,” Stingrays head coach Leanne Sirup said.

“Both of these young women did extremely well in achieving personal bests across the board. This was an extraordinary feat as they’re both racing on the national stage for the very first time and also performing at altitude.”

“This was the mood of the entire competition where less than 10 per cent of the competitors raced to their lifetime best in the morning,” Sirup related. “Bridget and McKinley did as they’ve always done in trusting their own abilities and bucking the trend.”

Two more Stingrays qualified for the Canadian Juniors, were unable to attend: Mary Paridaen Van Veen, 14, broke a finger playing rugby, and Oliver Castle, 18, was preparing to head to Thompson Rivers University in the fall.

“Qualifying for two A finals was more than I could have hoped for,” said Burton, who admitted she felt nervous prior to the meet. “I finally realized that I truly belonged there.”

Thomas-Perry called the 100m backstroke her personal highlight of the championships. She was seeded 25th prior to the meet, but climbed 13 spots by the end, along with breaking the club record twice.

“I was very very happy with all of performances, even if they didn’t go as planned,” she said. “As far as my overall performance goes, I am very pleased with it as well, I am also very delighted with how I carried myself and represented my team. My 200m backstroke was my first race of the meet and getting that personal best I think it really set me up for a great rest of the meet.”

Both swimmers admitted to being nervous before the competition, but they found ways to deal with it.

I remember jumping into the water for my 100m backstroke final and being very nervous but I just said to myself, ‘All the work that you have put into this, it’s paying off,’” Thomas-Perry recalled. “You have earned your spot here and you deserve to be here just as much as everyone else,’ and that really helped to calm my nerves.”

The highlight of the meet for Burton was competing in her first-ever swim-off at junior nationals in the 100m butterfly.

“The girl I was swimming against in the swim-off was from a big team and had lots of teammates,” Burton noted. “Although Duncan is a smaller team, I knew my team was there cheering for me.”

Thomas-Perry treasured the experience of not only competing, but also representing the Stingrays on the national level.

“It was such a new atmosphere to be in because everyone that was there, they were there to compete and to show off all of their hard work that they have put into swimming,” she said. “Although it was a new atmosphere I did think that it was a fun and cool one to be in and I really enjoyed being apart of it and getting to put myself out there.

Thomas-Perry became the 10th Stingray ever to achieve the Canadian Senior Championships qualifying standard, but decided juniors was a better fit this year, so she’s aiming to qualify for both next year, as is Burton.

Mom, dad and sister all members of the Cowichan Valley swimming community

Mary Paridaen van Veen comes from a family with strong connections to the swimming community in the Cowichan Valley. And it is this family involvement that makes her first gold medal win at the Cowichan 2018 BC Games even sweeter.

On Friday, Mary brought home a gold for Zone 6 at her home pool, the Cowichan Aquatic Centre, with teammates and coaches from her local swim club cheering her on.

“I’m so proud of Mary,” says her mother, Margaret Paridaen. “She has been swimming since she was five years old and is calm and cool under pressure.”

Mary’s first gold of the BC Summer Games came in the girls 14 and under 200m butterfly, her first of six races at the Games.

All three members of the Duncan Stingrays swim team that competed at the Summer Games — including Mary Paridaen van Veen, Bridget Burton and McKinley Thomas-Perry won at least two medals. 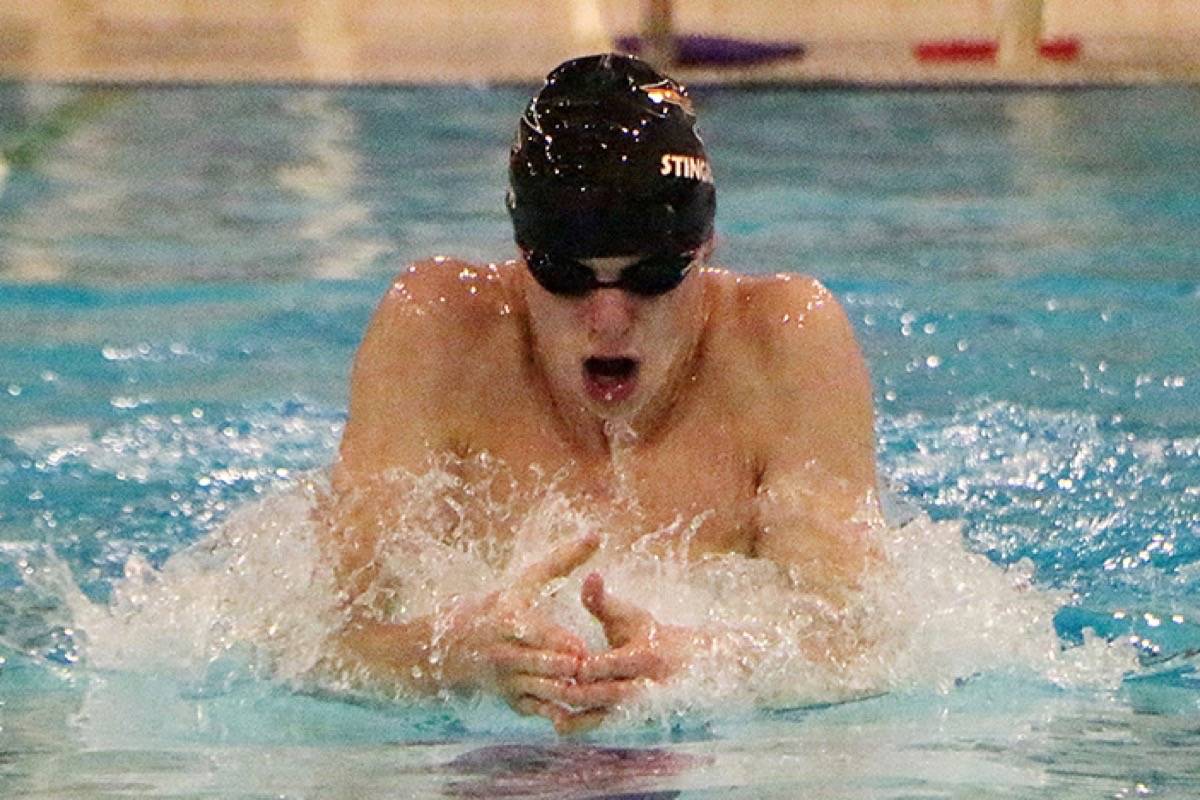 Stingrays in front of the pack at Hyack Festival Youth Cup

With a larger contingent, who knows what the Duncan Stingrays might have accomplished at the Hyack Festival Youth Cup swimming competition in New Westminster on the Victoria Day long weekend?

The Stingrays swimmers averaged 42 points per swimmer, five more than the winning host team averaged. Unfortunately for the Stingrays, they sent just five athletes to the meet, while the host club had more than 100 entries.

“This was a mid-season high-level test with much yet to be done to prepare for championship July,” Stingrays assistant coach Brent Forsyth said.

The goal for the Duncan swimmers, who train as much as 18 hours a week, was to compete at their best without letting up on the intensity of their training prior to the meet, and with more than 60 per cent personal bests, they showed that they could handle the pressure.

“This group is becoming much more resilient,” Forsyth said.

Forsyth was a member of the Island Swimming coaching staff when Ryan Cochrane trained with the club on his way to three Olympic and six Commonwealth Games medals, and the Stingrays’ regimen was inspired in part by Cochrane.

Oliver Castle, 17, had 50 per cent personal bests at the Hyack Festival, his most notable results coming in the 400m individual medley and 400m freestyle. Castle reached finals in all seven of his events and collected 37 points for the team. Two weeks after the New Westminster meet, Castle competed among many top-level swimmers in the 2018 Mel Zajac Jr. International at UBC, where his opponents included 12-time Olympic medallist Ryan Lochte.

Mary Paridaen van Veen, 13, was the Stingrays’ top scorer with 43 points, scoring in all eight of her events and placing second in the 100m butterfly and fourth in 200m butterfly.

Ty Dahlstrom, 13, achieved a team-best 80 per cent personal bests, and despite competing in a new age group, placed and scored in the 100m backstroke.